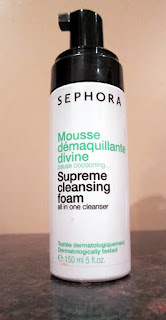 THE SKINNY: Sephora says its Supreme Cleansing Foam "removes makeup and cleanses the complexion in one simple step."

I found the foam to be runny and ineffective. Instead of removing the makeup from my face, it just seemed to smear it around, leaving me with those mascara raccoon eyes.

I've said before I'm not generally a fan of Sephora's skincare line. This product is probably the worst of the bunch I've tried.

I like my face soap to have enough lather that I know it's working. This later felt like the last gasp of the dish soap after you've washed up from Thanksgiving dinner.

And you know that's not going to clean much of anything.

KEEP OR TOSS: Toss. It can't be called a cleanser if it leaves you with raccoon eyes.

CHECK IT OUT: Learn more about Supreme Cleansing Foam and other Sephora skincare products on its website.